Androgenetic alopecia (AGA), also known as male pattern hair loss, is one of the most common conditions affecting men. In the United States, 35 million to 40 million men are affected by AGA. In some men AGA progresses to baldness over most of the scalp. Degrees of hair loss range from this most severe form of AGA to the least noticeable loss of hair in the front temporal area above the eyebrows. Loss of hair in the front temporal area is usually the first place where hair is lost in male AGA; in some men the loss stops there and never progresses while in other men hair loss continues into other areas of the scalp. Progression of hair loss is rapid in some men, slower in others.

The Norwood-Hamilton Scale illustrates a feature of AGA that makes hair transplantation possible: No matter how severe the hair loss, hair is never lost at the back or sides of the head or on the nape of the neck. These regions are under different genetic control from the genes that affect hair follicles at the front and top of the head. This “preserved” hair at the back and sides of the head is a reservoir of healthy follicles that can be harvested and transplanted to scalp areas where hair has been lost. 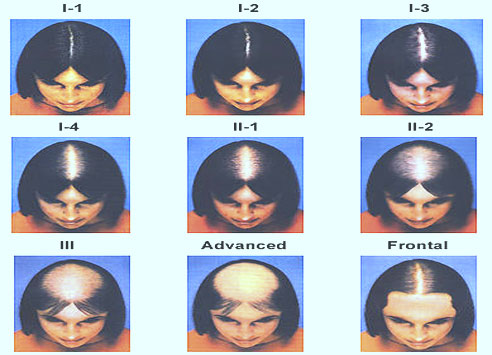 Unlike hair loss in men, female scalp hair loss may commonly begin at any age through 50 or later, may not have any obvious hereditary association. A woman who notices the beginning of hair loss may not be sure if the loss is going to be temporary or permanent—for example, if there has been a recent event such as pregnancy or illness that may be associated with temporary hair thinning.

Self-diagnosis is often ineffective. Women tend to have less obvious patterns of hair loss than men, and non-pattern types of hair loss are more frequent in women than in men. Diagnosis of hair loss in a woman should be made by a trained and experienced physician.

In women as in men, the most likely cause of scalp hair loss is androgenetic alopecia—an inherited sensitivity to the effects of androgens (male hormones) on scalp hair follicles. However, women with hair loss due to this cause usually do not develop true baldness in the patterns that occur in men—female hair loss occurs in various patterns and is often diffuse or veiled vs bald. Patterns of female androgenetic alopecia can vary considerably in appearance.

Patterns That May Occur With Female Pattern Baldness Include:

In the past few years, medicine has made tremendous strides in the treatment of men’s hair loss. With the advent of 5-alpha-reductace inhibitors such as Propecia and the evolution of surgical hair restoration, living with noticeable hair loss is no longer inevitable. For the first time in the history it is now possible to stop or slow the progression of hair loss and to replace lost hair through surgery with completely natural results. However, with that said, the vast majority of hair loss treatments being marketed today are still nothing but “snake oils.” You have probably seen the ads in the back of men’s magazines or seen or heard commercials and infomercials promoting miracle treatments for hair loss. The bottom line is that most advertised “treatments” do not work for the prevention and treatment of hair loss. If a hair loss treatment is not approved by the FDA or recommended by the American Hair Loss Association, chances are you are wasting your time and money.

Remember that successful treatment of hair loss is greatly dependent on early intervention. It is critical to begin treatment with an effective product as soon as you notice the onset of hair loss.

Finasteride is the generic name for the brand name drugs Proscar and Propecia. Finasteride was originally developed by the pharmaceutical company Merck as a drug (Proscar) to treat enlarged prostate glands.

During the trials on men with prostate problems, researchers noted an intriguing side effect: hair growth. Since finasteride had already been approved by the FDA to treat enlarged prostates in men, Merck decided to pursue the possibility of developing finasteride as the first pill to treat male pattern baldness. Minoxidil, a topical liquid solution, was already on the market.

In December 1997, the FDA approved a 1mg dose of finasteride for the treatment of androgenetic alopecia (male pattern baldness) in men. Propecia is the first drug in history to effectively treat male pattern baldness in the majority of men who use it.

Finasteride’s hair-raising success is due to its ability to specifically inhibit 5-alpha-reductase, the enzyme that converts testosterone into a more potent androgen dihydrotestosterone (DHT).

Propecia’s 1 mg dose of finasteride can effectively lower DHT levels in the scalp by as much as 60% when taken daily. It is DHT that shrinks or miniaturizes the hair follicle, which eventually leads to baldness. This 60% reduction in DHT has proven to stop the progression of hair loss in 86% of men taking the drug during clinical trials. 65% of trial participants had what was considered a substantial increase of hair growth.

At this point, the only truly effective medically proven way to arrest the hair loss process is to lower DHT levels. The American Hair Loss Association recommends finasteride as the first line of attack for all men interested in treating their male pattern baldness.

Nine out of 10 men who took Propecia/Finasteride saw visible results in both a reduction of further hair loss and regrowth of hair.  Healthy hair usually grows about half an inch each month, so results may not appear for several months.  If there is no improvement within one year, further treatment is unlikely to be effective.  However, most men reported an increase in scalp hair within the first 12 months and enjoyed continuing improvement throughout treatment.  For some men, it also slowed further hair loss.

There is a risk of certain side effects associated with finasteride/Propecia, including decreased sex drive, difficulty achieving erection, or a decrease in the amount of semen.  Each of these side effects occurs in less than 2 percent of men taking Propecia.  It has also been established that inhibition of a certain enzyme can cause the male breast to engorge or a condition called gynecomastia.  Patients should notify their doctor if any of these symptoms are present.  Propecia can also affect the results of prostate screening exams, so patients should always notify their physician if they are taking this medication.

Propecia should not be handled by any women of childbearing age, as its active ingredient can cause abnormalities with the sex organs of a male baby.  Propecia pills are coated to protect against contact with the active ingredient during normal handling.

Minoxidil was the first drug approved by the FDA for the treatment of male pattern baldness. For many years, minoxidil, in pill form (brand name Loniten), was widely used to treat high blood pressure. Just like finasteride, researchers discovered a very interesting side effect of the drug. People taking the medication were growing hair in unexpected places, such as on their cheeks and the back of their hands. Some people grew hair on their foreheads.

Some enterprising researchers had the notion that applying minoxidil topically, directly on the head, might grow hair on balding areas. It did, to varying degrees depending on the extent of the hair loss, but at the time it was revolutionary.

While minoxidil has been clinically proven to slow the progression of hair loss and regrow some hair, most experts see it as a relatively marginally effective drug in the fight against hair loss. Since minoxidil has no effect on the hormonal process of hair loss, its positive effects are at best temporary and usually yield somewhat disappointing results.

The American Hair Loss Association still recommends the drug for those who have not responded favorably to finasteride treatment or for those who would like to add another product to their regimen. The AHLA does not recommend minoxidil as the first line of attack for men suffering with male pattern baldness, but does recognize it as an effective treatment for a small percentage of its users.

It takes time for hair to regrow. Most people need to use this medication regularly for 4 months to see benefit. This medication must be used continuously to maintain hair growth. If your condition does not improve or worsens after using this medication for 4 to 6 months, or if you think you may have a serious medical problem, tell your doctor.

To find out if Hair Restoration/Transplant is right for you, request a consultation by email or call our office at (850) 308-1738 to make an appointment.

›
Select Saturdays
9 am - 12 pm
by appointment only

Email Us Directly
info@lebeauclinic.com
©
Warning: Use of undefined constant Y - assumed 'Y' (this will throw an Error in a future version of PHP) in /home/customer/www/lebeauclinic.com/public_html/wp-content/themes/lebeau-clinic/page-insidepages.php on line 321
2023 LeBeau Clinic | All Rights Reserved.